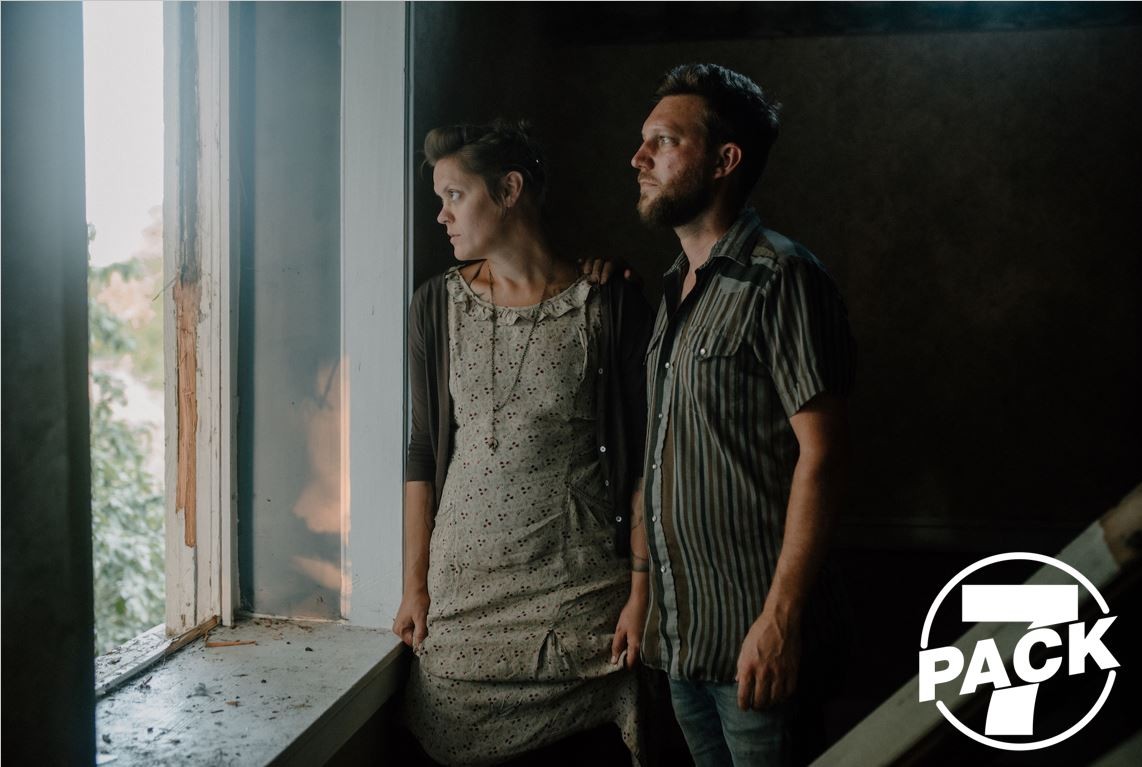 The Rough & Tumble aren't casual road dogs, but they aren't letting on, either.  From their upbeat, commanding stage presence and sharp banter, to their earworm-inducing melodies and heartstring lyrics, this dumpster-folk/thriftstore Americana duo refuses to bring the haggard road-worn stereotype to their audience-- even though they've earned it.  In fact, The Rough & Tumble have been elbowing out of most stereotypes.

Writing and performing together since 2007, Mallory Graham and Scott Tyler inevitably formed The Rough & Tumble in 2011 as the friends turned into bandmates.  In 2015, after a bad Nashville landlord left them without heat for 12 days during an ice storm, the bandmates turning spouses decided to hit the road. They sold everything they could, bought a 16' camper (despite the warning of their families and the lot salesman), packed up their instruments, their dog, and a couple of small trinkets shaped like elephants and mice that they couldn't part with, and hit the road.  They've been touring relentlessly since with their two 100lb rescue dogs, Mud Puddle and Magpie Mae, in spite of multiple burnt up axles, busted tires, and consistent water leaks.

On February 19, 2021 The Rough & Tumble dug into the severed branch of their family tree, bringing their newest work, We're Only Family If You Say So, a full length record about what it takes to be family-- and what it means to lose it.  As with their previous two albums, it was recorded in East Nashville, TN with producer/engineer Dave Coleman. With its release, fans are already Saying So. The raw, emotive nature intersects with the sweet, nearly upbeat tone that touches a nerve unfortunately familiar to listeners, particularly in the aftermath of division in both nation and families alike.

The new record follows on the 2019 release Howling Back at the Wounded Dog, a 10-song album wherein response was audible, with audiences literally howling back at performances coast-to-coast. The opening track "The Hardest Part" won the Independent Music Award's Best Americana Song of 2019.

The Rough & Tumble were voted The Listening Room Network's 2019 Artist of the Year, and were one of the Southeast Regional Folk Alliance's Official Showcase Artists in 2018. Graham and Tyler have been hardworking and constant in their dedication to their craft, releasing an album or EP a year since 2014's Holiday Awareness Campaign, a project where they took 24 under-appreciated holidays and wrote 24 under-appreciated songs for them. 2016 saw the band writing the soundtrack to the award-winning Alyssa Pearson short film, Pieces and Pieces, and in 2017 they teamed up with Asheville pop producer, Matt Langston, for an EP called Cardboard and Christmas Lights. In 2018, they released their first full length record, We Made Ourselves a Home When We Didn't Know, recorded and produced by Dave Coleman in East Nashville, TN. When the band's touring plans were derailed by the pandemic in 2020, the songwriters took to recording fan supported song commissions on the tape deck they were quarantined with, an ongoing project called Everything Goes Viral But My Band. After years of research and 7 months of being stuck inside, The Rough & Tumble released a special Halloween project in October  2020, called Be Good, Little Children: The Lullafrights, Vol. 1, a collection of scary lullabies for grown ups.

Songwriters and storytellers, Mallory Graham and Scott Tyler will have you in stitches one minute and falling apart at the seams the next. Joy and sorrow, comedy and drama all have the same punchline, it's just the setup that's different.  The Rough & Tumble's voices fluctuate between power and delicacy, demonstrating restraint while sinking the accelerator to give each song its due. Their close-harmony weaves interchangeably. They aren't afraid to take an audience from the lighthearted to the gut wrenching, and they do it seamlessly, with care for their listeners and integrity to their craft.

With a  little luck and a lot of cooperation, you'll catch this duo rambling into your town in 2021.

"Wow! Do not pass up on the opportunity to host this wonderful duo. Mallory & Scott were the total package--very musically adept and charming. Their joy of playing music together was evident throughout the evening. This joy is what really resonated with our audience and made for very special evening. They and their dogs were the perfect guests. Mags & Puddles got along well with our dogs & were well behaved, so don't let the fact they travel with them scare you. Overall a truly wonderful experience!" - C. Mccauley, August 2019, Broadlands, VA

"Fun fun, fun, we enjoyed these two. Great songs, great personalities. Wonderful communicators. You know when you wish the songs would go on longer that you have a winner." - B. Amidon, May 2018, Alamagordo, NM

"Fun and FUNNY! What fun to have this duo in the house, they charmed our audience with their eclectic folk tunes and their silly stories. I recommend Scott and Mallory for any audience, but especially the ones who like to laugh. Great vibes, great guests!" - A. Fletcher June, 2017, NY

Sold Out The Rough & Tumble